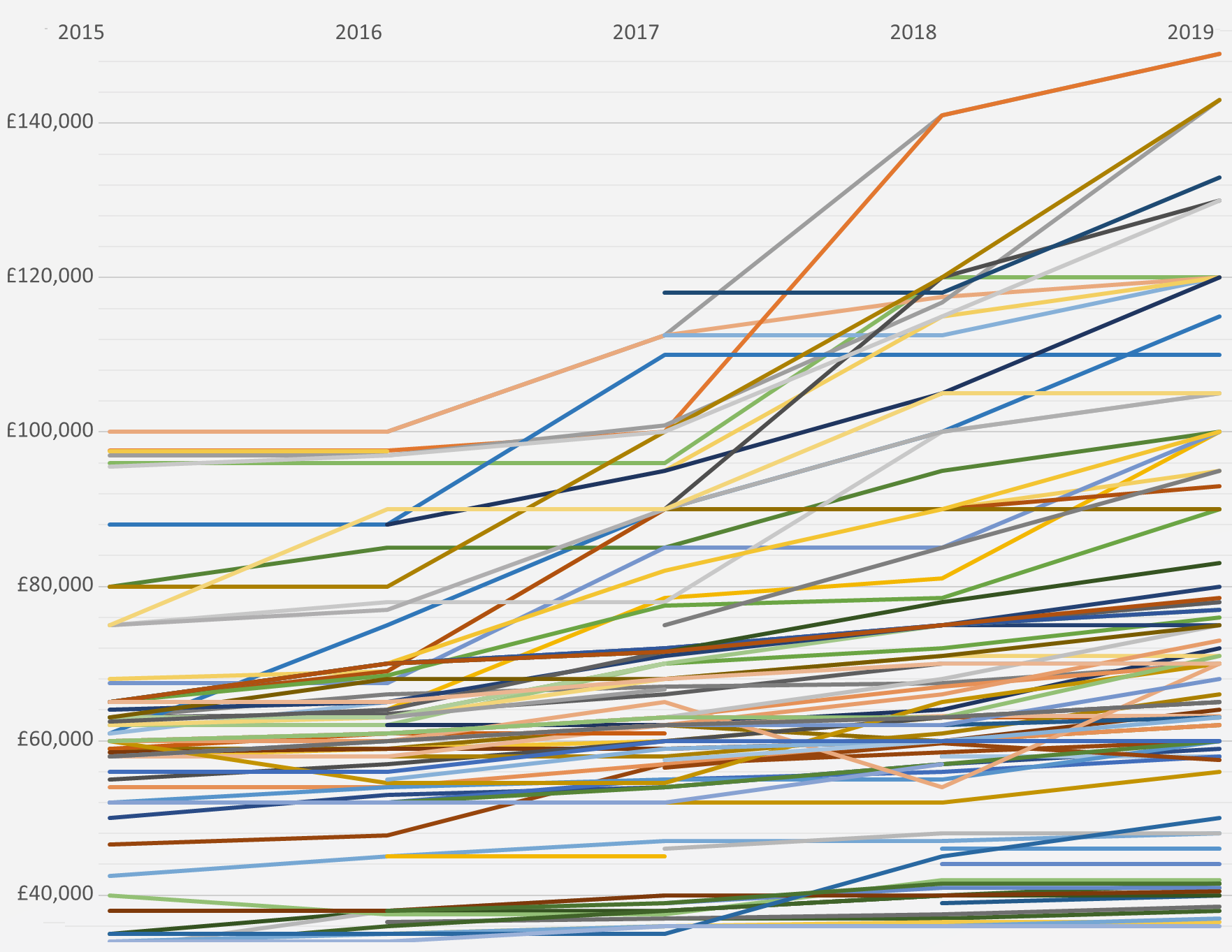 US firms present a power struggle in the London market – but this is very old news, says our research. What is new is the surprising hold millennials have in this economy.

The magic circle’s mini tussle over NQ pay this year is not quite the grandiose expression of market dominance that it might seem. It’s more of a reaction. There’s a long history running up to it and we've analysed NQ salary data over five years to explain what's going on.

The graph above tracks each firm's NQ solicitor salary every year since 2015*; its rate of growth is remarkable. All was sane in 2015 with its 2% increase, but since 2016 salaries have increased by a 6% year-on-year average. This has been driven by the richer US firms gaining a foothold in London – without them growth would have continued at around 2%. The likes of the magic circle and HSF have increased way above 2% p.a. but would they have done so without the Americans pushing it?

These firms have an interest in building a London presence as their natural European hub, so paying above the odds is worth the investment. White & Case, one of the US firms we’ve covered since we began research in 1998, has always paid well above market rate. Back then White & Case was the top NQ payer in the market at £45k, 40% above the magic circle. Then when Cleary joined the guide in 2000 it made its big début with a brazen £59,500 for NQs – almost double the wage at the magic circle. So ensued a phase of salary inflation led by a handful of US big shots. Sound familiar?

White & Case and Cleary – two of the most established US firms in London – no longer lead the NQ salaries table. Their respective £105k and £120k salaries remain comfortably above the magic circle as they have done for 20 years, but time has allowed them to build their brands locally. They no longer need to make such an effort to compete with the elite because people know they are the elite, and it’s time to let the smaller, newer US offices have their moment. Step forward Vinson & Elkins, Akin Gump, Kirkland et al.

If 2016 was the starting line for the new salary race, what started it? Although likely to be overblown by the man himself, the 45th president’s election is credited with an uptick in the US economy; the managing partners at US firms we interviewed that year told us it did coincide with a renewed confidence in transactional work. The same year saw the Brexit vote trigger the pound’s drop in value so the dollar increased in power. Now the firms that decreed their salaries from their American HQs could take advantage of the exchange rate – some even pay in dollar value, perhaps just to rub it in.

Now we’re in 2019, you’d be right to wonder how this is still sustainable. Salaries have to reflect the underlying economy – big star-spangled pockets will only stretch so far. The highest paying US firms commonly specialise in transactional, financial and, in particular, private equity. In the US and globally PE has enjoyed phenomenal growth over the past 5 years according to Bain & Co. In the US this year transactional law overtook litigation in staffing numbers, according to our research. It’s propelled Kirkland to the top of the global law firm revenue chart. (Take a look at the London Private Equity ranking to see how dominant US firms are.)

'Our research indicates little difference in working hours between the US firms and the magic circle – every salary sends a message and these firms know the value their brands still carry.'

This chart below picks out a few firms noteworthy for their trajectory (or lack of). Look at the plucky Texan Vinson & Elkins racing to the top, growing its NQ salary by 70% in the space of four years. It pays $190,000 to new starters in the US, so why not compete? Shearman and Weil have both increased by 36% since 2016 and are typical of the US firms’ growth in this period. Cooley’s 53% growth is partly down to its evolution: this office basically used to be London’s Edwards Wildman Palmer, but then California’s Cooley took it over and it became an American firm with American salaries. Until the magic circle got busy this spring, Herbert Smith Freehills was the highest paying UK firm at NQ level**. Slaughters almost matches HSF now, but also offers an 8.5% bonus, meaning Slaughters is kind of matching Freshfields, Clifford Chance and Allen & Overy’s £100k – until they too pay their bonuses, which they will***. But the salary headlines from these elite British firms are a response to the US firms. Their names still carry enough prestige to get away with paying less. Our research indicates little difference in working hours between the US firms and the magic circle – every salary sends a message and these firms know their brand value.

Beneath them we’ve singled out firms that typify their categories. Big-name City firms and silver circlers like Ashurst, NRF and Travers have historically been competitive payers, but so absurd is the US pay hike that now their pay sits around the average for our survey. We should note that a 20-some of the lowest paying regional firms didn’t submit figures, which also keeps the average high.

Beneath that, Burges Salmon typifies the salary at big regional firms, Leigh Day the non-City London firm, and GLP indicates what the public sector was able to offer, which remarkably found the resources for a 12% hike – even during four years of austerity Government Legal still has to compete for talent with the private sector.

The 2019 NQ salary distribution: the elite pulling away from the old guard 'To the untrained eye this looks like an assertion of power from the wealthiest firms – but are they also bidding for talent knowing their tough working culture comes at a higher price to the millennial lawyer?'

For the first time in our research, new lawyers are prioritising themselves over what the world expects from them. The world has shifted from 10 years ago, when prestige and earnings were the biggest motivators; today new lawyers value ‘the intellectual challenge’ and ‘quality of life’ above any other outward signifier of success. This is a problem for law firms. Rallied by social media, millennial lawyers are pushing back and challenging established practices. Not since the 60s have we seen such empowerment at the junior level. The law firm hours culture is under intense scrutiny for its impact on wellbeing, gender diversity and the attrition of women from senior roles. The new generation has decided something has to give. Are we surprised, then, to see salaries going through the roof at the most demanding end of the profession? To the untrained eye this looks like an assertion of power from the wealthiest firms – but are they also bidding for talent knowing their tough working culture comes at a higher price to the millennial lawyer?

*These are the firms taking part in our research and willing to give us their salary data, so it's not a perfect survey but it shows the behaviour of the more influential half of the UK market.

**Since writing this, HSF has again released an NQ rate above the magic circle's at £105k

We'll be analysing this trend as it progresses. In the meantime, feast your eyes on the whole of the legal profession's benefits packages. Working at a US firm in London

Americans and Brits go their own way on so many topics. But on the London legal scene, are US firms really so different?

Read our True Picturereviews of over 130 leading law firms

Firms by size and location

Becoming a lawyer with a non-law degree

Do you want to be a lawyer?

How do you become a lawyer?

Becoming a corporate lawyer: the view from Freshfields

We asked some of Freshfields’ transactional experts to explain what they do. (sponsored)

The law firm of the future

Artificial intelligence will transform the law. Womble Bond Dickinson is on the case. (sponsored)

STEM students: how to become a commercial lawyer

With global firm Clifford Chance we discover how a STEM background can lead to a legal career. (sponsored)

We interviewed some Jones Day litigators to learn how they're building their careers. (sponsored)

Interviewees at Vinson & Elkins tell us what lawyers working in this fast-changing area do. (sponsored)

What do banking lawyers do all day? Interviewees at Baker McKenzie explain. (sponsored)

Globalisation and the law

Learn how to cut it as a lawyer in the globalised economy with Norton Rose Fulbright. (sponsored)