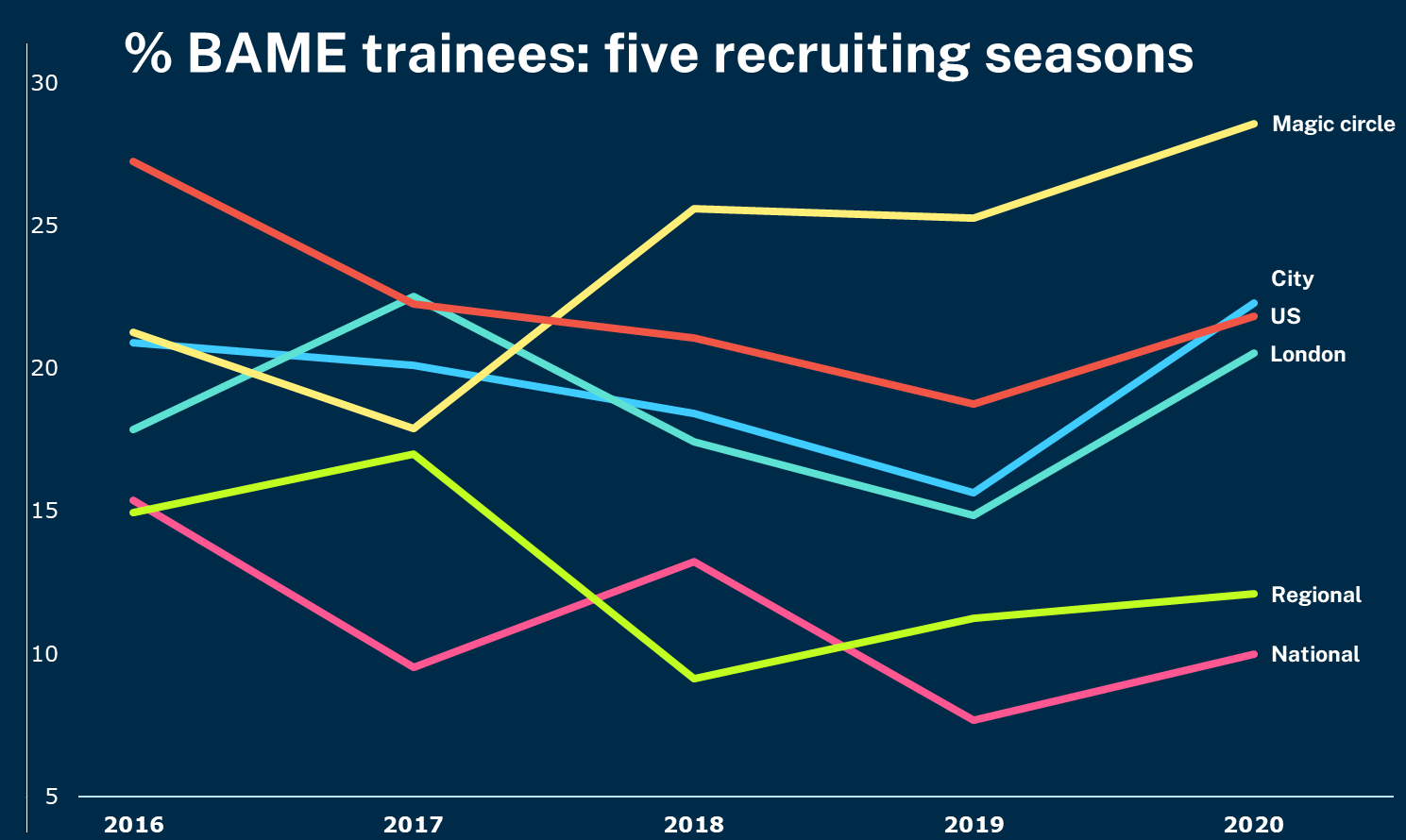 Every year we track the diversity statistics of the leading law firms in the UK, and in this report we examine the trends over five years of recruitment cycles.

Anyone familiar with the legal profession will note how the concerns of diversity and inclusion have moved to the fore over the past five years, both in rhetoric and initiatives. The topic has commanded significant time and budget, so it is a surprise to see these efforts not bearing fruit in the actual numbers of BAME lawyers in law firms.

The five-year net-effect on BAME hiring and promotion is shown below. To see no improvement over this period prompts the question: where has this money and effort gone? The breakdown of this data year-by-year shows an interesting trend. The numbers take a noticeable dip between 2017 and 2019, especially with trainees. But during the past year we’ve seen a renewed increase in BAME recruiting. There are strong indications this is the impact of the BLM movement in summer 2020.

We interviewed James Partridge, Allen & Overy's graduate recruitment partner and training principal, about his firm's response to last year's crisis: "In the immediate aftermath of the George Floyd news, there was a very powerful message sent internally and shared externally from senior partner, Wim Dejonghe and managing partner, Gareth Price, it then falls to each part of the business to encourage conversation and reflection. We are encouraged to see how and what we can change. For example, the first seat trainees got together and had a virtual discussion about the resurgence of the BLM movement and have shared some suggestions with me on what they think we should be doing from both a recruitment and retention perspective." Read the full interview with him here. We group law firms by type because of the behavioural commonalities they share. Below we’ve broken down BAME trainee recruitment by law firm type. Firstly, we see that the underlying regional population affects application numbers – it’s not the case that regional offices are making less effort than London. But we should recognise the magic circle for outstripping the market on BAME hiring. These firms have put their weight behind the issue and been proactive about publishing their figures in detail and seeking improvement. We asked Tiernan Brady, Global Director of Inclusion at Clifford Chance, about his firm's strong performance and this was his measured response: “There’s a lot done but there’s an awful lot more to do. I think what the statistics show is when we really turn our focus to an area such as recruitment, we can create real change, and that’s one of the great success stories for us. But the real challenge we have is to replicate that success in retention and promotion. So we need to give focus and support to the retention piece now.”

Why has progress stagnated?

Brexit: The dip in BAME numbers does coincide with the age of Brexit. Ethnic minorities in Britain faced increased racism and discrimination in the wake of the EU referendum. Concerns over a shift in cultural attitudes could certainly be a factor, affecting the candidate’s faith in the system, sense of entitlement to a position, or confidence at interview. Not only that, but the uncertainty of what it means for free movement and working visas would likely cause people to postpone any decisions that could be affected by how Brexit shapes up.

Complacency: The volume of rhetoric can convince us that we have ‘solved’ diversity. Everyone is assumed to be on board with the ideas, law firm culture has improved, but not enough rigorous follow-up is happening.

Rejection of quotas: Many believe quotas to be problematic because the minority group wants to know they earned their position, and the majority group can view it as a disadvantage to them. The market wants to uphold a meritocracy, so in avoiding rigid quotas we don't have direct accountability for the figures.

The law firm groups perform in a similar way at associate level, but with US firms overtaking the magic circle. In partner numbers too, we see the magic circle making the greatest improvements. The London category is the non-City firms: the litigation houses, the boutiques and the ones with more niche practice areas. “The most dangerous thing we could do now is to think that the success in recruitment will automatically roll into retention and promotion."

There are success stories across the data, but the bleak five-year trends require inspection. There are numerous reasons why BAME lawyer numbers are disappointing. The availability of BAME leaders is a huge factor. If incoming lawyers can see themselves represented in the higher ranks of firms, they are more likely to believe they can progress to that level too. The absence of BAME partners sends BAME applicants warning signals about their likelihood of success at that firm.

Tiernan Brady of Clifford Chance was cautious about celebrating his magic circle firm's performance: “The most dangerous thing we could do now is to think that the success in recruitment will automatically roll into retention and promotion. That will only happen when we give it the same attention and focus we gave recruitment."

When we interviewed Steve Cooke, senior partner at Slaughter and May, he reinforced this message: “We need to change the way we integrate people into the business, because it’s about retaining people, rather than just recruitment." Read the full interview here.

No matter how much recruitment teams get it right at entry point, the associate and partner numbers also depend on how long BAME lawyers are staying at their firms. The firm may have D&I initiatives in place, but the subtleties of implicit bias mean most D&I work fails to keep it in check, and influences beyond the workplace reinforce biases and undo a lot of good work.

As we see below, BAME trainees report being less likely to get their first choice seat by a difference of 4%. That difference is implicit bias. It may not appear a significant percentage difference, but these interactions and minor injustices stack up, and after a hundred instances of subtle bias, the career opportunities for a BAME lawyer and a white lawyer have materially diverged. The BAME lawyer feels more palpably disadvantaged, and they look for a firm that will take D&I more seriously.

We asked 3,200 trainees if their seat allocation was their first choice: There are some success stories within our research that deserve holding up, but the prevailing message is that the UK legal profession hasn't done enough. The BLM movement in 2020 was the wake-up call that prompted many into action. We explore what the lasting impact of these events might be: our senior researcher Ayesha Hayat reflects on 2020 and looks to the future>>.

Every year we ask law firms engaging in our research to supply headcount demographic figures covering gender, ethnicity, LGBTQ+, school background and disability. For five seasons now, we have a robust data set. The data here is based on surveying 138 leading UK law firms. Annually we get an average 95% complete set of ethnicity data. The firms taking part in our research are the 138 larger recruiters in the UK market, accounting for approximately half of all the training contract positions available. So broadly speaking, this survey represents the more competitive half of the entire UK legal industry. Bird & Bird associate Rachel Welch-Phillips tells us how Black Lives Matter prompted change in the corporate world last year and discusses some of the ongoing issues for BAME lawyers as we enter 2021. Events of 2020 taught us we haven’t done enough to tackle structural racism. What should the legal profession take away from Black History Month? Read up on the organisation behind the Vantage platform and various other initiatives that aim to boost social mobility in the profession. The impact of Covid-19 on access to the law

Here the Vantage ambassadors discuss the issues that impacted access, including the roll out of virtual opportunities and the standardisation of A-Level results.