How do you become a barrister? 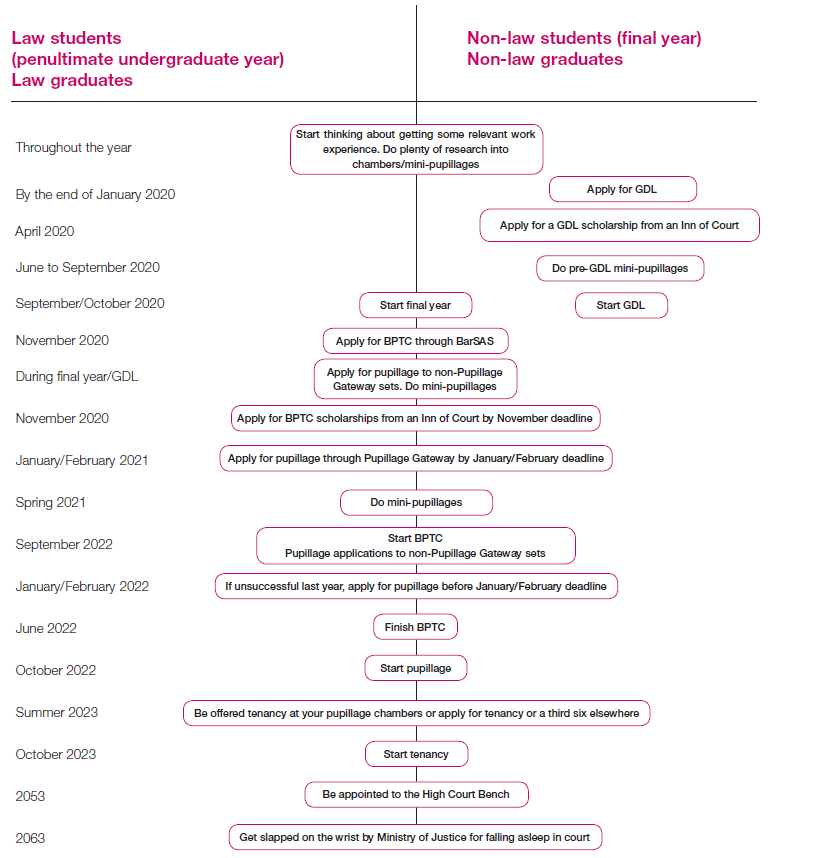 Have you got what it takes?

Do you enjoy debating and mooting? Are you a good debater? Are you good at using advocacy skills? Are you well-organised and a good independent worker? Do you love the finer points of law or the cut and thrust of head-to-head confrontation? If the answer to all these questions is 'yes', then the Bar might be the right career path for you.

Forget teenage dreams of shouting 'objection!' in court and poncing about in a wig – if you're serious about a career at the Bar you'll need real determination and staying power to succeed. The competition is fierce with 3,000 applicants vying for around 400 pupillage vacancies each year. Ask yourself: do you have what it takes? Read our Preliminary warning and find out Are you Bar ready?

Certain activities are musts while you're a student if you want to succeed as a barrister: debating, mooting, court visits, networking, getting advocacy experience, mini-pupillages – get stuck in. Oh, and make sure you get a First, or at least a high 2:1. At university or Bar School you join one of the four Inns of Court, the Bar's professional associations. As a student the Inns have two main uses: they provide generous study scholarships (worth £5.6 million all told) and are excellent for networking, mooting and training.

The Bar Professional Training Course (BPTC) is expensive and tough. It's a one-year course which you are required to undertake before starting pupillage. Around 1,000 individuals graduate from the BPTC each year.

The decision about whether to go to Bar School is a difficult one. Only a few sets offer funding to support you during the course, and you will need to decide whether to enrol on the BPTC before you know if you have gained pupillage for the following year. Eight institutions offer the BPTC – read our Law school reviews for more.

Most barristers' chambers ('sets') recruit pupils a year in advance. Recruitment in 2019/20 is mostly for pupillages starting in September 2021. Some chambers recruit just a few months (or even weeks!) in advance. A tiny number recruit two years ahead of time too.

Around half of sets recruit their pupils via the Pupillage Gateway, a centralised online application system. The deadline for applications made via the Gateway in 2020 is in early February. Other sets recruit directly and you can find out about their application process in our Chambers Reports or on sets' websites. It's important to tailor your application to each individual barristers' chambers – explain what attracts you to pupillage at that set. Our Chambers Reports and the Chambers UK directory can help with this. Pupillage interviews are notoriously demanding – expect to be grilled on various legal topics by a panel of barristers. You can read more about Pupillage applications and interviews elsewhere on this website. Many successful candidates apply several times (over several years) before gaining pupillage.

Pupillage is a one-year period of training, which is a necessary requirement before you can become a practising barrister. Pupillages are usually undertaken with a set at chambers, but can also (though more rarely) be done in-house or with the Government Legal Service or Crown Prosecution Service. Sets may have anywhere between one and five pupils, though two is fairly usual.

During pupillage you will be assigned to one or more supervisors and will assist them with their work. Depending on the set you may also gain experience 'on your feet' appearing in court for a client. Pupils are assessed and at the end of the year it's decided if they will be invited to become a member ('tenant') at the set. Find out more about Pupillage and tenancy.

The Bar has its own traditions and vocabulary. Get the low-down on the (meaningful) jargon in our 'Barcode' glossary of terms.

Your career at the Bar

The process of becoming a barrister is not complex to understand. Almost anyone can get into Bar School, provided you have a 2:2 and can pass a straightforward entrance exam.

The tough part of landing yourself a pupillage and then tenancy. The Bar offers one of the most challenging career paths out there.

How do you become a judge?

Training for the Bar

The Inns of Court compared

How to gain pupillage: inside advice

An individual's experience of applying for pupillage

Barristers at Keating Chambers share their views on how to build you career in construction law and give advice on how to get into the field. (sponsored feature)

Planning and environmental law: the view from Landmark Chambers

Barristers from Landmark Chambers explain what planning and environmental law is, give an insight into what's going on in these areas of law, and advise on how to get into the field. (sponsored feature)