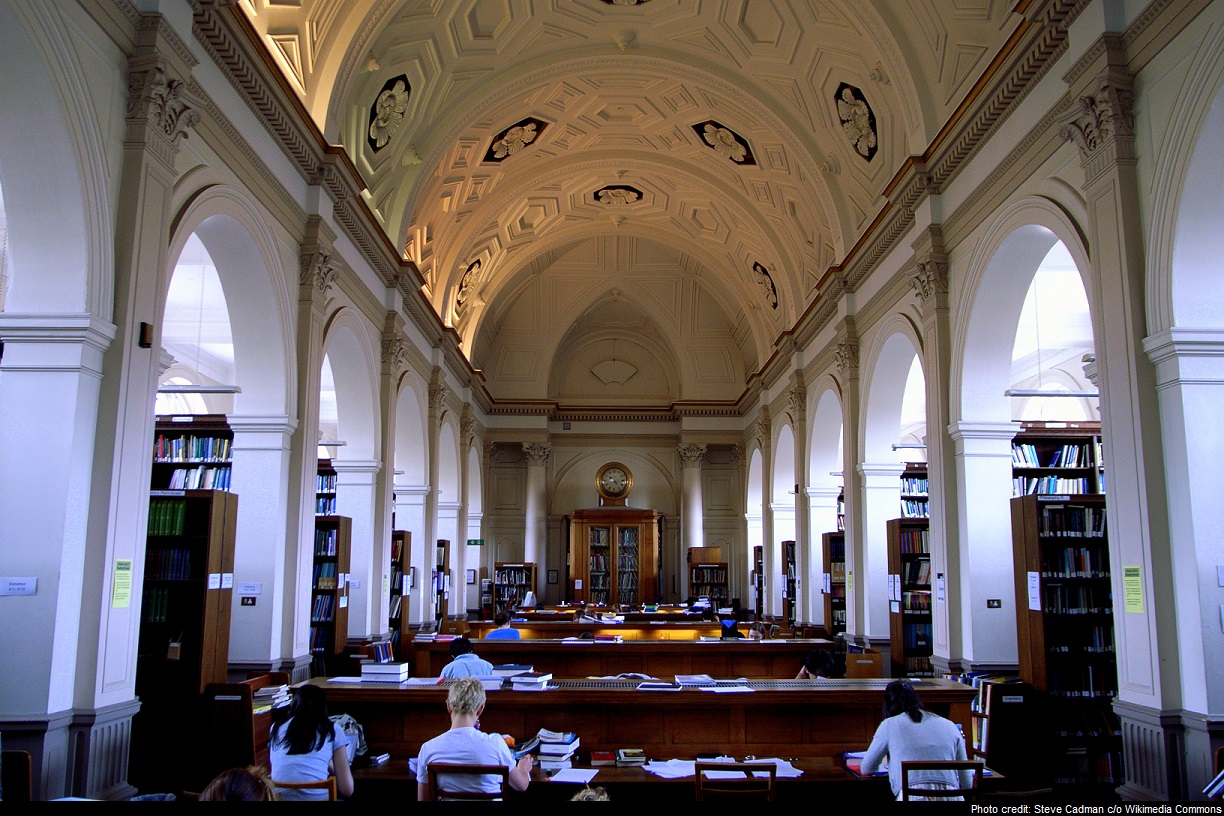 2016 report: what universities do law firms recruit most from? In the past three years we've asked 2,300 trainees at 124 firms which university they went to. Here are the results.

'You should be on track for, or have obtained, a 2:1 degree minimum.' You'll be familiar with this declaration from poring over law firms' grad recruitment pages. It’s all about the grades, we hear and, rightly, firms conceal their preferences for certain universities. But this is the UK, where judging people on their university is pretty much mandatory – in the legal profession especially. This survey gives the real story on entry requirements.

Between 2013 and 2015 we interviewed over 2,300 trainees for our True Picture reviews. Each trainee told us where they completed their undergraduate degrees. With this mass of responses we crunched the numbers to reveal which universities funnel the most trainees into the market – and what segment of the market.

Before we launch into the results, a few points to bear in mind:

The majority of our trainee interviewees – 81.4% – hailed from a Russell Group university. Out of these, Oxford and Cambridge came out on top, together accounting for almost a fifth of trainees surveyed. Those from other UK universities formed around one seventh of the total, while overseas graduates made up roughly a twentieth.

In all, 83 UK universities were represented in our sample – an encouraging 14% increase on the total in our previous 2012 report, signalling attempts to attract more diverse candidates. Below are the 30 universities that were most frequently cited. The coloured arrows indicate rises or falls compared to our 2012 survey.

But this ranking doesn't reveal the full story. The order of universities changes depending on the market and region of the UK. To grasp these nuances, let's take a closer look at these distinct areas.

London is a global legal hub only rivalled by New York. The prestige, the career opportunities, the money and the city itself combine to attract the brightest, hungriest and most gumptious graduates. But the highest salaries in the business and top-notch commercial work also demand stamina and an appetite for long hours and hard work, more than any other city. A natural target for ambitious go-getters London may be, but there’s a mutual attraction going on. Prestigious law firms lock their gaze on graduates from these prestigious universities, knowing they don’t have to look far for the brightest and most driven candidates. Since employability is a factor in a university’s prestige, this is a convenient relationship for both the firms and the universities, so it’s hard to break.

No surprises here. In comparison to the overall picture of London, the top end of the market held a higher proportion of Oxbridge graduates; a similar amount from the remaining Russell Group universities; and fewer trainees from other UK institutions. The most noticeable change in the chart saw Manchester elevated to fourth place as opposed to tenth in London overall.

At these firms, we spoke to graduates of 46 different universities. In this portion of the London market, we began to see a little more variety: fewer Oxbridge graduates, more from the remaining Russell Group members and a stronger showing from other UK universities. In comparison to the larger London firms, the gap between Cambridge and Durham closed, while the prominence of certain Russell Group members shifted: Exeter, Southampton and Leeds gained traction, while Manchester slipped again.

At these firms, we spoke to graduates of 58 universities. US firms in London had the highest percentage of Oxbridge and overseas graduates in the entire survey. The London universities – LSE, UCL and King's – continued to perform well here, while Nottingham lost the dominance it maintained in the other London categories.

Why are there so many Oxbridge trainees? Less established US firms concentrate their recruitment efforts on the 'top' universities in order to increase their prestige and position in the London market. These firms compete to pay the top salaries, outstripping the magic circle firms, while the style of work is not miles away from the UK elite. That said, some US firms are more comfortably positioned here, so they hire less aggressively and are less closed off to students outside of the Russell Group: our trainee interviewees in this category had attended universities such as Kingston, Leeds Beckett*, Aberystwyth and Bangor.

At these firms, we spoke to graduates of 36 universities. Away from the capital, the configuration shifted again. Oxford and Cambridge toppled from the top spots and slipped down to 15th and 18th positions respectively, accounting for less than 5% of the population. This allowed other Russell Group universities to ascend the charts: note Durham is no longer the top of the Russell Group outside the capital, giving way to Manchester.

The biggest percentage jump was claimed by the non-Russell bunch: together they now accounted for almost a quarter of the trainees. We found that universities like Northumbria, Kent, Reading, UEA and UWE played a much greater role in supplying trainees to national and regional firms.

At these firms, we spoke to graduates of 68 universities.

At national firms – those with various offices throughout the UK – a clear winner emerged: Manchester took centre stage, leaving Durham some way behind. You'll notice that the Midlands and Northern-based Russell Group universities did particularly well here. This is not too surprising, as many of the largest national firms have a strong collection of offices in these areas.

Compared to our regional breakdowns, we saw a greater percentage of Russell Group-educated trainees, and fewer from other UK universities. We also encountered more overseas graduates than we did across the separate regions.

What does this data mean?

If you're currently studying at a non-Russell Group university, do not be discouraged by this report. The number of universities that trainees hailed from was up by 14% compared to our last report three years ago. And the mix was refreshingly eclectic: one of our interviewees had originally trained as a vet at the Royal Veterinary College; another was a musician who'd earned a degree at Trinity College of Music; and a couple had explored their artistic interests at the Courtauld Institute.

What's more, non-Russell Group trainees popped up in all of our categories. At some of the biggest and most prestigious firms in London – seemingly the preserve of the university elite – we encountered trainees with degrees from non-traditional institutions like Brunel, Keele and Hertfordshire. One magic circle interviewee was a single mum with two kids and had graduated through the Open University.

Here are the 55 universities in the UK and the Republic of Ireland which came up in our sample outside of our top 30, in alphabetical order:

Another ray of hope: law firms are beginning to show that they're less obsessed with university name and grades. Instead they're becoming more interested in simply sourcing candidates with the right qualities to make them a great lawyer. City heavies Clifford Chance and Macfarlanes set the ball rolling with 'CV blind' interviews; a recruitment method which (you guessed it) leaves interviewers in the dark about candidates' educational backgrounds. Other firms have since followed suit, in a bid to help remove bias from the process and allow recruiters to focus solely on an individual's qualities and responses. We expect that more firms will adopt techniques like this in the years ahead as they acknowledge the need to be more diverse. Organisations are beginning to recognise that talent is found everywhere – not just in the most prestigious universities, which struggle themselves with a bias towards the privileged.

If you're currently studying at a Russell Group university, bear in mind what we've just mentioned above. Don't get lazy and assume you've made it: the name of your university is not an elixir that will impel recruiters to hand you a training contract. If you mill about for three years, get poor grades and put no thought into your future legal career, then don't expect a flood of training contract offers. Recruiters will overlook you in favour of those who've been on it and performed well – no matter what university they've attended.

If you're considering where to complete your undergraduate degree, do not let the results of this report override key considerations: a particular course you’re passionate about; doors open to you by pursuing a certain course; a location’s appeal and the accompanying cost of living; how close by your parents should be; the social life and your general happiness.

With law firms starting to become more open minded about university background, we're hoping that the next time we crunch our numbers we’ll see a greater number of universities represented. The more that firms adopt techniques like CV blind interviewing, the more pressure there'll be across the industry to broaden recruitment and adhere to new standards.

Regardless of which university you're at, concentrate on trying to tick all of the boxes. Make sure you've been consistently on track for that 2:1 (minimum); get yourself some relevant work experience, ideally at a firm; keep yourself abreast of what's happening in the wider world and how that may affect the industry; and build up your interpersonal charm – those vital soft skills that are required in order to build rapport with clients and generate business. It's the full package that recruiters are after: the more you prove you can offer that, the less your university will matter.

This feature was first published in February 2016

The school background of trainee solicitors

How to succeed on the LPC

Being a trainee: realities of the job

The regions: a closer look

In each of the regions, the local Russell Group universities often came out on top. Bristol and Exeter took the lead in the South West; Nottingham and Birmingham in the Midlands; Newcastle and Durham in the North East; and Liverpool in the North West.

Oxford and Cambridge moved down the chart in all areas (and sometimes disappeared from it altogether). Universities outside of the Russell Group came to the fore, particularly Northumbria in the North East; Lancaster in the North West; Nottingham Trent in the Midlands; UWE and Plymouth in the South West; and Kent, UEA and Reading in the South/Thames Valley. These universities frequently rivalled or overtook Oxbridge in the charts. From Jamaica to Australia, from Brazil to Ukraine: our interviewees in this category came from all over the world. However, almost 30% of our overseas sources gained their degree in the Republic of Ireland. Trinity College Dublin was the most commonly attended university in this entire category (putting it in the same ballpark as St Andrews, UEA and UWE).

Most sources from overseas flocked to London's largest players and US firms operating in the capital – places that especially value trainees with international backgrounds and additional language skills. We rarely encountered overseas graduates at the regional firms we researched.

Our graph below makes no distinction between UK and non-UK citizens.