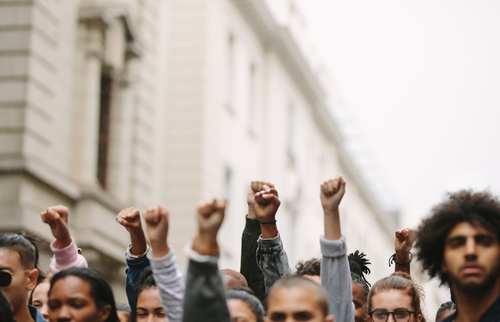 The end of protest?

The right to protest is a fundamental pillar of any functioning democracy. Hard fought victories have historically come through the noisy and disruptive action that challenges state policy and power. Yet the means through which to challenge this power will fundamentally shift with the passing of the Police, Crime, Sentencing and Courts Bill.

Introduced earlier this year, the Bill prompted outrage as it ushered in whole swathes of draconian measures that will bolster police power and curtail tactics used by protestors. It also contains provisions that would directly reduce the rights of Gypsy, Roma and Traveller (GRT) people and their nomadic culture, by criminalising trespassing and strengthening police powers to seize property where individuals reside. Read our Memo entry from when the Bill was first announced here.

“In an enlightened democracy you accept that there’s a social benefit to obstructive protests or protests that create a limited disruption.”

The Bill itself was already widely condemned for its assault to civil liberties and the right to protest. Yet the government has gone further and quietly added several concerning new amendments. So quietly in fact that they’ve been added at such a late stage in the passage of the Bill that MPs in the House of Commons will not have a chance to debate them. High-profile NGO and non-profit organisation Liberty succinctly wrote that things have now gone “from bad to worse”.

Dr. Jen Hendry is a law and social justice professor at the University of Leeds. She tells us that “it seems to be a Bill that has really overgrown its boundaries, as if no-one really has control of it any longer.”  She highlights the overspill of the Bill’s scope and the eleventh-hour additions as causes for concern. “To talk about adding something as substantial as restricting people’s right to protest is enormous, especially considering that parliamentarians in the Commons have not had a chance to debate it.”

Adam Wagner, high-profile human rights and public law barrister at Doughty Street Chambers, told us: “Protests are all about ways of getting attention and the problem with these amendments is that they criminalise actions that used to be non-criminal offences.” For Wagner, these new amendments critically undermine the time-honoured logic that underpins why people act. “In an enlightened democracy,” he says, “you accept that there’s a social benefit to non-violent disruptive protests or protests that create a limited disruption.”

Dubbing it a “Home Office wish-list” in a knee-jerk response to actions by Insulate Britain and Extinction Rebellion, Wagner says the Bill has been long in the making. “I think the government has seen this opportunity to introduce a whole suite of laws aimed at restricting large-scale protest,” he suggests. For Hendry, the impact of this will see the power of protest dissolving. “I think it would be very difficult to look at these amendments and think they’re anything other than a deliberate intention to dissuade a perhaps more casual protestor from participation in public protest,” she warns. This chilling effect will disenfranchise members of the public and simply leave them with the infrequent power of making their concerns known at the ballot box.

There are four main amendments that have caused alarm, the first of which would criminalise ‘locking on.’ This is a tactic historically used by protestors to naturally sustain the longevity of a protest through having individuals glued, tied, or ‘locked’ on to things, thereby preventing immediate removal by law enforcement. Under the proposed amendment, the punishment for ‘locking on’ would be up to 51 weeks in prison, a fine, or both.

“These are not powers you want a government to have at all.”

Linked to this amendment is the new criminal offence for anyone at a protest with equipment that could be used to facilitate someone ‘locking on.’ As broad as it is nebulous, this amendment would effectively render any individual carrying any manner of innocuous item – be it super glue, duck-tape, or a bike lock – as a criminal. Wagner explains that this amendment makes “anyone who attends a protest potentially a criminal in the eyes of the police because they don’t know what you’ve got on you.” Hendry agrees, saying: “Under this legislation, you could genuinely and seriously end up in trouble really just by participating in a protest.”

It will also be an offence to obstruct a major transport work. Ostensibly in response to the actions of environmental groups in recent years, this amendment would see any individuals obstructing or interfering with the construction of a major transport project to face up to 51 weeks in prison, a fine, or both. There are also increased sentences for those willfully obstructing a highway. Perhaps most troubling, the government has enhanced stop and search powers. Not only does it allow officers to search a person or vehicle if they suspect they’ll find items related to the amendments above, but it also introduces ‘suspicion-less’ stop and search, which Wagner rightly considers “completely mad.”

“This fast-tracking of criminalisation will only worsen the impact on marginalised communities.”

This alarming new amendment would equip officers with the power to stop individuals without suspicion in a specified place for a specified time. Criminal Justice Alliance figures show that black people are six times more likely to be searched than white people, so it follows that these new expanded stop and search powers will disproportionately affect black and other racialised communities that are peacefully protesting. A 51-week prison sentence, fine, or both, would again be the punishment for obstructing a ‘suspicion-less’ search. “This escalation seems enormous,” Hendry says. “This fast-tracking of criminalisation will only worsen the impact on marginalised communities where there are disproportionate subsequent effects of incarceration, criminal records, and so on.”

Nestled amongst these new measures is also the introduction of Serious Disruption Prevention Orders (SPDOs), akin to Antisocial Behaviour Orders. These orders would be imposed on an individual who has committed two protest-related offences in a five year window, and prevent them from associating with certain people, restricting their movement, and restricting how they can use the internet. This amendment renders individual liberty to that in name only, all for the ‘crime’ of peacefully protesting.

“We will be in a really illiberal place if these amendments pass.”

Wagner says: “It’s basically making protest in itself a criminal offence. Blocking a high-way, having lock-on materials, being in suspicion around a protest: these are all set to become criminal offences.” He adds: “These are not powers you want a government to have at all, which is perhaps why in the past we haven’t given them.” With buy-in from the middle-ground or average citizen now less likely when faced with a custodial sentence or draconian punishment, Hendry believes fringe-causes will lose out. “I suspect that this Bill will dissuade the more socially conservative people away from seeing protests as a viable political activity, which is really worrying,” she says. The Bill will equip the government with power to distinguish between good and bad protests, and provide law enforcement with discretionary powers to stamp out action that they do not deem acceptable. “You’ll probably see a withdrawing of student activity,” Hendry adds. “The movements that will really suffer will perhaps be the more focused, single-issue ones. Like activity surrounding the Grenfell fire, for example.”

And for Wagner, this would result in further strain on an already fractured relationship between protestors and police enforcement. He says: “These amendments are going to create an antagonistic relationship between authorities and peaceful protestors, which I do not think is good for democracy.” Should these amendments pass, the right to protest and means through which to carry out peaceful action will irrevocably change. “I think we’re in a danger zone now,” Wagner concludes. “We will be in a really illiberal place if these amendments pass.”