Trainee retention 2019 – which firms are most likely to offer their trainees an NQ role? 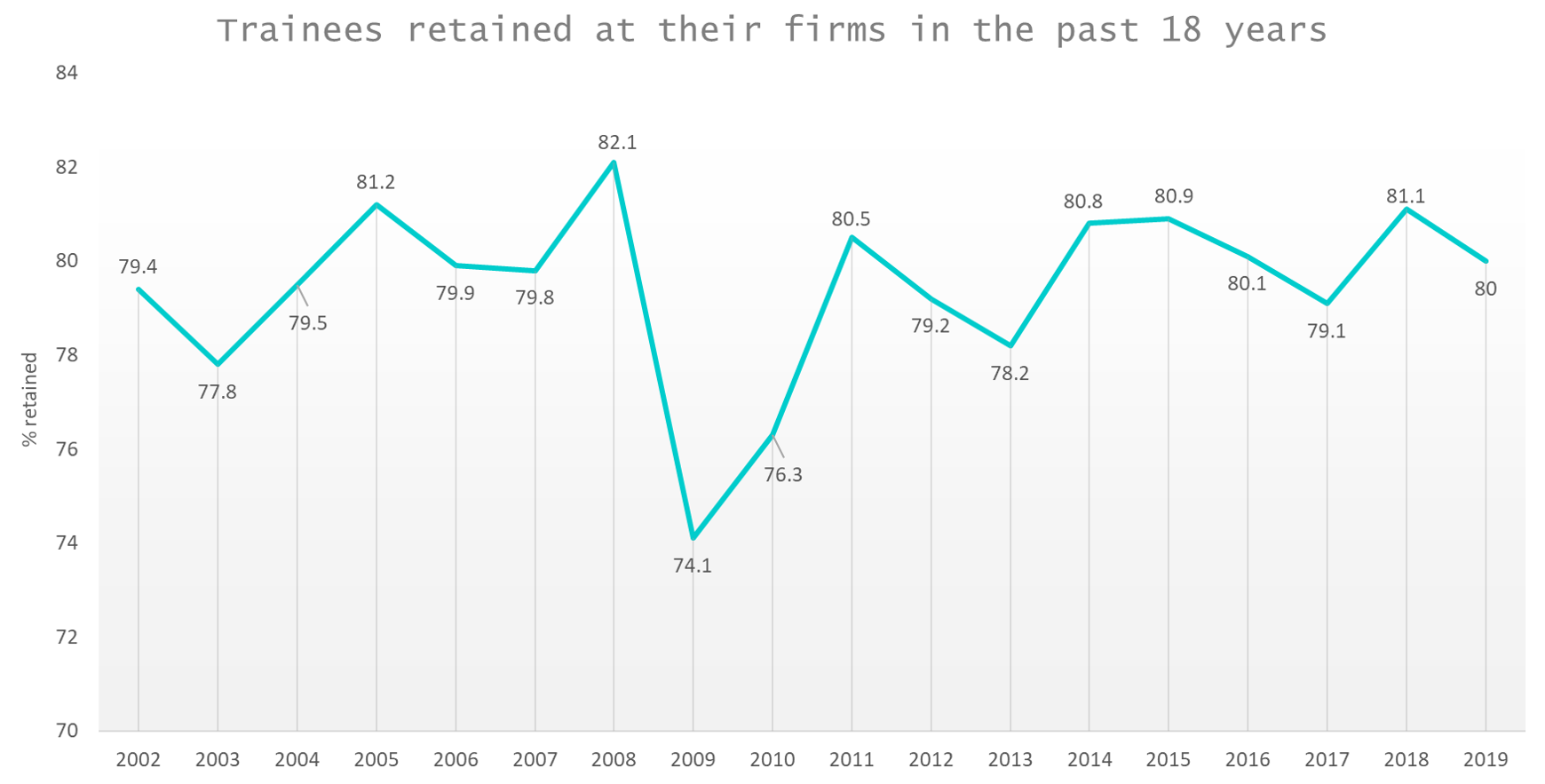 Trainee retention 2019. How likely is it you'll secure an NQ position at your firm?

In our latest retention survey, we weigh up trainee retention rates across the legal market.

99 problems but retention ain't one

There’s a lot to worry about right now – climate change, disease pandemics, the speed of technological progress… and of course, Brexit. The fortunes of the UK in 2019 were, we think it’s fair to say, mixed – we won the cricket, but got battered in the rugby.

Happily, if you were a trainee due to qualify during this period, there was more good news than bad. Near enough to 80% of qualifying trainees from the 125-or-so firms we surveyed in 2019 secured NQ roles at the firm they trained at. This represents a slight drop from 2018’s market-wide retention figure (81.1%) but continues a nearly decade-long trend following the financial crash of around 80% of trainees being retained. Twenty firms boasted 100% retention and, encouragingly, there were more firms who retained 90% or more of their trainees (34) than there were firms who retained less than 70% (23 altogether). A more extensive breakdown by percentage shows that the vast majority of mid-sized and larger firms in the market retained at least 70% of their trainees in 2019.

It’s always worth comparing retention rates to NQ salaries – surely the more money a firm pays, the more likely they are to keep hold of trainees? Turns out that’s not strictly true. Our next graph suggests that firms paying less than £40,000 are more likely to retain trainees than the US titans paying top dollar – and that there’s little overall correlation between NQ salary and retention.

It’s worth noting that only four of the firms who submitted data pay below £40,000 and only three firms are in the £80-£89,000 range. Even so, it’s strange indeed that retention rates plummeted in the £40-49,000 rate – coincidence? This could be the position in the market at which the‘grass is greener’ mentality kicks in on qualification: you’ve qualified at a respectable regional firm but feel like you deserve more or want to relocate to the City.

We hear time and again in our surveys from trainees and NQs that pay is far less important to them than work quality, culture, work/life balance and long-term career prospects, hence the relatively flat correlation here: salaries don’t have the bargaining power you might expect once you throw in the question of hours.

- There are no NQ jobs in the trainee’s favoured area of practice. Rather than stay in a second-choice department, they look towards other firms.
- The firm has more qualifying trainees than jobs available. This is especially likely to happen at a firm which has recently undergone a major merger or is in some financial difficulty.
- Maintaining a pyramid-shaped workforce. Large firms need a lot of manpower at the junior end, but can't provide long-term careers and commensurate salaries to all their recruits.
- Personality clash. For some personal reason you don't gel with the firm or its people. No biggie. Move on.
- Personal reasons. Trainees might fall out of love with the firm, with the law, or the city they work in.

We also like to analyse how retention rates differ by the various types of firms covered in Chambers Student. Historically, the magic circle have been strong performers when it comes to keeping hold of trainees, and 2019 was no exception with an 89% average across the five firms.

Perhaps surprisingly, American firms in London are among the poorest performers, sitting just below the average at 79%. Why would this be? It could be indicative of a more aggressive US ‘up or out’ culture, but it might simply be down to the numbers – most US firms hire far fewer trainees than their homegrown rivals, so losing one or two throws their whole data set out by a much wider margin.

There are other stories to draw from this data – firms concentrated in one region beating national players, as well as non-City London firms seemingly struggling to keep hold of their talent.

What more can I say

You're a student. NQ retention is an abstract thing that's several years in the future. The important thing is that you get a training contract at a decent firm, right? Perhaps, but a fulfilling, successful career is governed principally by the culture of the firms you work at, and retention rates offer a window on a firm’s culture. First, you can tell whether a firm’s investing in you and recruiting future partners or hiring for low-level grunt work. Second, high retention rates mean you're not spending two years competing with your fellow trainees like some job interview from hell, so the culture is likely to be more collaborative and less back-stabby.

Market trends will only tell you so much, but retention rates are important to consider when you’re looking at training contracts. Long-term job security is, for many, worth more than any amount of money.

Retention at firms with 10+ trainees